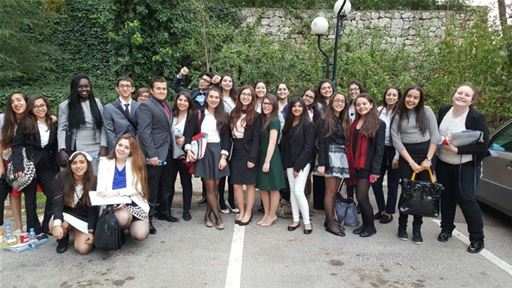 Our participation in the MUN/MAL as a school has been going around for years, and we have reached a peak in student motivation and perseverance. Throughout the term, participating students have been spending some Saturdays in LAU which is the host of the Model United Nations and Arab League conferences. During these days, the students undergo rigorous training sessions where they are taught the essence of caucusing, public speaking, debate and diplomacy, as they are engaged in activities that enhance personal development and skills.

This opportunity to learn about how the UN conferences unroll leads up to a two day conference where each student will be a delegate of a particular country in a particular council. Out of all other school teams in Lebanon, hopefully this year, our students will shine just as brightly.

Also, the below students won awards during the Model Arab League Conference:

The amazing students Mohammad Abou Harb and Houda Atassi, have been chosen to go to Georgetown, Washington D.C. with LAU for the world Model Arab League Conference.